Every game rager feeders or people who clearly have no idea how to play and run down mid. My behavior score is only 7400. It's not that low.

Meanwhile enemy is always working together, picking well, etc. What is going on?? -1000mmr? third most played hero, techies.
do u even heard about karma? Yea that's how it works, been there (4.3k down to 2.7k). Especially after abandons I've noticed the game becomes even worse and more unplayable than the "normal" hidden pool. Stop playing ranked until you notice a change in the trend and try to raise the bhs in the meantime. GL

Can you link account so we can analize your performance ?

The amount of delusional crap you guys saying in this thread is out of scale. I've played on my friends account 2,5 k mmr with 5k beh score. I got griefers every game (mute button instantly when someone cry for no reason), but from the moment they notice that you can actually carry them and you provide good dota experience for them, suddenly you get 4 commends after game. I literally played any random hero I liked to, not looking at what is good or not in a specific game and here is the result. I was even drunk and eating pizza at that time. 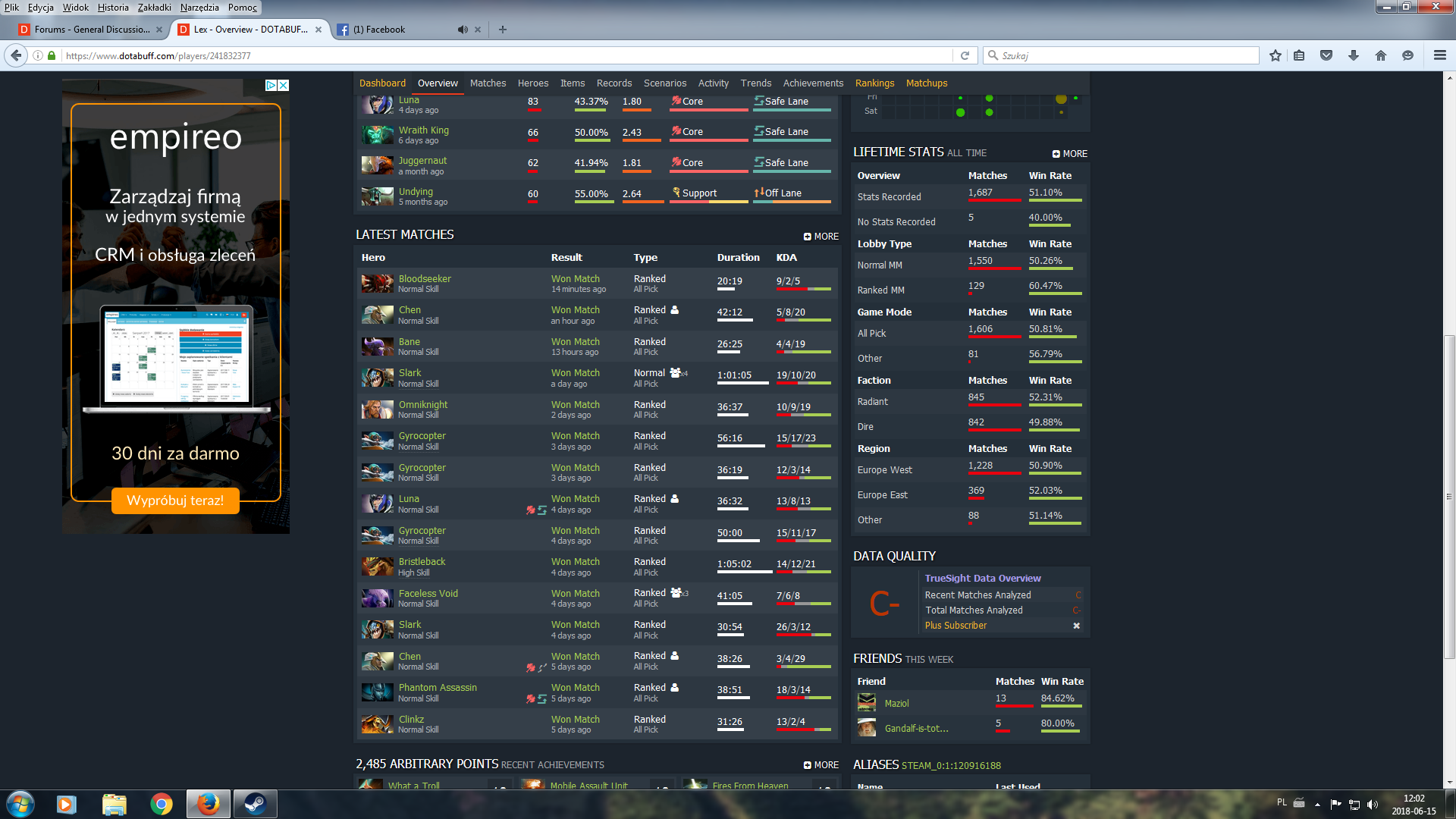 If you lose so much mmr its all on you and you probably affect your team in a very negative way somehow. Sometimes its just super bad behaviour like "you stole my creep" and you start flaming the guy for the rest of the game. Some people type whole game why they think that mistake on minute 3 was not theirs. Others have just that irritating playstyle where they afk farm or go farming instead of taking objective when they can and drag the game till 50 + min. Sometimes they TP out for no reason to farm lane when your team is pushing, leaving everyone to die. There are tons of ways you lose such a huge amount of mmr in a short period of time. There is no hidden pool. Its only you and your misbehaviour and your mistakes in a long run. You can blame 1 game but you cant blame every team in every game for 1000 mmr loss. GOSH.

If you play properly, just basic proper dota. You can get Divine with not much effort. But you have to actually learn basics. People who drop usually learned some mechanics the wrong way and its so rooted in their playstyle and they are so delusional about their team being bad(and not them ofc), that they will stick to their mmrs forever. Or just make trilion of new accounts.

Noone ever said winning in <5k bh bracket was impossible, just harder. a divine player should have expected high win ratio in lower brackets. whenever u hit low behavior score ur off the forced 50% win rate around where you belong and it will most likely put u back at least a couple of mmr.
not only you seem to be playing in party queue u also dont even seem to have kda justified to "solo carry" these games.
currently hidden pooled, again, u get games like this
archons/new accs in my team, enemy immortal https://www.dotabuff.com/matches/5428365250
i rather lose in normal queue than drop mmr though

"Noone ever said winning in <5k bh bracket was impossible, just harder" Do you have any clue what you are talking about ? Does that mean that games >5k are easier ?

This picture I uploaded is from last year when I was Ancient 3 on main acc at that time and this particular account was Archont 3.

"not only you seem to be playing in party queue u also dont even seem to have kda justified to "solo carry" these games." Wow this is pure bullshit. During this streak I played 2 party games in which my "teammates" were dragging me down. KDA? :D Stop being delusional about KDA being a game wining condition.

You guys are delusional AF. Besides I wrote that clearly. Playing that games on Archont I was usually playing with 1 hand and holding Cuba Libre or Capriciosa in the other with my legs on desk. So dont tell me you're in a hidden pool or Gaben be sending mmr assasins. xd

All you can say is "BUT". BUT Lex you were higher, BUT you played in party (I didint), BUT you you are 5k (I was 4k back then), BUT you dididnt get those animals (I did get them).

WIth 100% accuracy I can tell that instead of calming the game/people down you put more fire into it whether with poor playstyle, poor behaviour or both + tilted.

Lex stop wasting your energy for retarded ppl.
I have 1k behavior smurfs and i even win when im pos 5 (out of token).
Last time i remeber i lost because of behavior; i had 2 lvl 1 junglers. not sure tho, was the neutral items patch, might be cause of that :))

They are just special kids, laugh and move on is real, happening to me, i gained recently around 700 mmr with like 70% winrate, then suddnly juggernout mid, windranger offlane, disconnection, abbandon, trash talk smurf 0 communication, all lanes always lost etc like i'm in some kind of hidden pool, after gaining 700 mmr real fast now lost 300 mmr in 2 days

edit: i just found a game where my offlane picked riki, instant abbandoned the game and uninstalled, i will be back when the matchmaking is improved OP I need a smurf to play on if you are interested in getting 1000 MMR back.

@Lex there's a difference between the usual bad games the hidden pool is full of, where people tilt easily and you need to walk on eggshells, and those absurd streaks of beyond toxic games where you see 1-25 scores after 15 minutes, 2-3 people walking down mid, blocking camps or dual jungling and all. Your argument is reasonable if we're talking about semi-normal games. Tilting doesn't help either of course and fastens the drop, but man imagine how matches have to be for a person to lose 1k-1.5k mmr.

This acc that I borrowed was from a friend that claimed the same. „Lex im in shadow pool, its impossible to get out of this trench”. Then I got a streak.

Ofc I had to mute some people, calm some people down or just ignore them and let them feed cos someone took his 1 creep. Big ego guys, small penises. These games were not semi normal at all. when you are in the pool just play 5 man stacks LOL valve cant get you if you choose ur own allies.

kda on core is game winning condition when u are playing in lower mmr brackets than you are used to yourself. if not then it means that your other teammates in general are doing better than the enemies, which clearly isnt the cause once ur hidden pooled. have very ahrd seeing that acc u seem to be on good but ur not showing the whole activity feed, u sure it was below 5k behavior score or was itaround 5k?

when ur hidden pooled and queue with other good behavior people valve will still try to get to u by placing u in opposite team a smurf or two.

agreed to scar, like that fucker was crying so much he wrote thread about me when i ahd semi good behavior score and got pooled with him. i bet he was so lucky there wasnt someone running down mid from start for a change, blocking jungle camps, abandoning etc.

also nhow did u know it was hidden pooled, at that time there was no displayed behavior score, sure u could use that console setting but im very sure that hidden pool conditions have changed. before <5k behavior score were all pooled together 5-6,5k together, 6,5k+ together, some exceptions were made at times when there were limited people queuing and the lower behavior wscored one had queued for a very long time.
im very certain that things has changed because at my worst days im slightly below 5k behavior score but the games arent as hard as they used to be long time ago.

yo wtf why are u posting a picture of your smurf account to prve the point that u can win in hidden pool?

^that game would have been a typical semi-normal, still winnable hidden pool game if you hadn't turned it into a shitshow. Dedicating a thread to you was the least I could do, fucker :D
@Lex I get your point but I still don't think we're talking about the same type of games.

"If you play properly, just basic proper dota. You can get Divine with not much effort. " 10k games on the two accounts he openly shares to be his, and aslo seems to be playing lots on other peoples accounts.
KEKW

Klippan why are you so retarded? What is the point of your argument? I play on my alt where I have all cosmetics.

Proof of hidden pool or it didint happen. You are just matched with people with low beh score. Thats it, end of story.

If i drop below 9k beh score there is already a significant difference in game experience, not to mention some 5kish.

what is your point of argument in showing that u can have 15 win streak on lower mmr accounts? i had 15 win streak on this acc not too long ago either like i dont understand how it has anything to do with shadow pool. it seems like u and your friend misunderstanding the term shadow pool and nothing else.

what ur kinda saying is that even an idiot like yourself can manage divine after 10k games its nothing new and is completely unrelated to shadow pool. low mmr games isnt the same thing as shadow pool even though your friend seems to think that the reason he dont win in low mmr games is because hes getting the worse teammates.
why do u have all your cosmetics on your alternative account? i thought u ran a big company so paying a lil bit extra cash for skins instead of grinding battle pass levels on main acc wouldnt be any problem?
it seems to me like u dont want more games on your main until u hit immortal because its not looking as good when u have many games on your acc.

why do people get so hung up on number of games. Number of games dont mean much as MMR was reset multiple times. Each version patch is completely different from previous patches. Being whatever mmr in patch 6.5 is completely different than being whatever mmr in 7.2. Almost everyone has 1000s of games on some other account but that doesnt mean anything cuz it was played under extremely different environment and rules. Plus with the core and support mmr change plus new calibration plus combination of core and support no thing you did before jan 2020 mattered might as well have started fresh discounting all the previous games you played.

Only thing that really matter is what medal you have right now in the current patch. Once new patch comes out again it is another reset.

i agree that people like kowareta and his dog lex tend to think that everyone is going for TI and get too hung up to games.

totally agree with 9o6
each patch has their story, ccnc, rtz, sumail, crit dropping ranks in na every time patch changes and new leaderboard players shine. u know dota is about patches and not about adoption/understanding. some ppl are good at certain patches and others suck ass when a hero getting +1 armor

what a fucking big moron you are

When i used to play on smurfs i was 6k behavior on my main tho.
I just used to abandon carelessly.