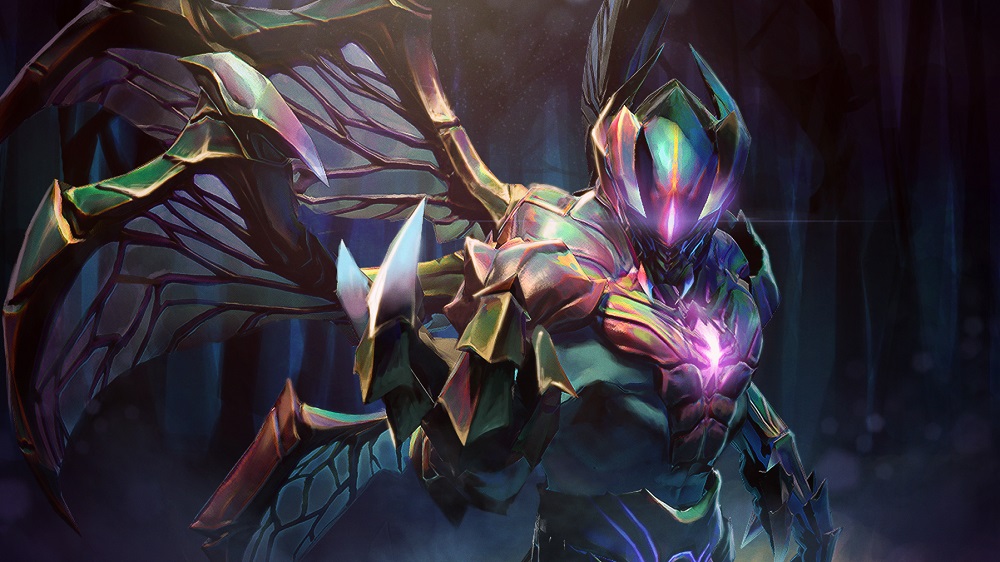 Last week when we did our new patch overview, we’ve omitted Night Stalker from the discussion. His win rate was already pretty high and the ~2% increase flew under our radar. However, it is impossible not to talk about this hero now, since he currently wins 55% of all his games, making him one of the strongest offlaners in the game.

7.20 was the patch that changed the hero the most, making

Crippling Fear a sustained AoE ability around the hero. It came in the same patch that removed the active component from

Hunter in the Night and introduced the

The end result was a very different hero with a very different set of tools and in-game goals. Whereas previously Night Stalker was a scout first and foremost, after the changes the most viable route was building Night Stalker into a tanky frontliner who could soak up damage, while providing information for his team and zoning out or killing supports.

The problem with that was the lack of lane presence. Without the ability to flash-farm or recover in the jungle, the hero’s success was mostly dependant on the first five minutes of the game—the period when he is at his weakest. Only several buffs and the deny XP changes later did the hero become truly strong and only recently did the players discover it.

Night Stalker currently starts the game with 660 HP, 4 HP regen, almost five armor and 63 attack damage. There were no recent changes to any of these stats, but there was a very important change to what enables all of it—movement speed. As a melee hero with 285 MS, Night Stalker couldn’t apply any pressure and most trades didn’t go in his favor, but as a hero with 295 MS and full damage

Void he is no longer an excruciatingly slow creep during the daytime and is even more of a hunter during the night.

Night Stalker’s current most popular and most statistically effective build is pretty straightforward. Maxed out Void and two points into Hunter in the Night by level seven is the standard. It is usually followed up by a value point into Crippling Fear by the time the second night hits, but then maxing out Hunter in the Night takes priority.

In fact, most players opt to skip their talent at level 10, going for a 4-1-4-1 build instead. They usually take the +200 health talent at level 11, since it bolsters the agreed upon current playstyle for offlaners—being hard to kill and hard to ignore. At level 15, for pretty much the same reasons, the +15 Strength talent is picked.

When it comes to the hero’s item build, there is also very little flexibility. Both Aghanim’s Scepter and Solar Crest are game changers for the hero and the order in which you build those is highly dependant on the state of the game.

An early Aghanim’s Scepter is extremely powerful for skirmishes and teamfights, especially if it is built before the enemy gets his BKBs. If your team is capable of applying pressure and taking over the map control, rushing it can ensure favorable trades across the map and the way for Night Stalker to remain a useful piece even during the daytime. Moreover, it can sometimes be used as a farming tool, though that route is pretty expensive mana-wise and should be used cautiously.

An early Solar Crest, on the other hand, fits much better when you are required to spearhead ganks and create space for greedier, farming cores. It allows Night Stalker to focus down his targets much faster, but makes him significantly less useful during the day and in the early teamfights.

Most of the time you will get both items, however the order in which you purchase them can lead to a massive difference in your success: Night Stalker is a hero that needs to snowball and a hero that can’t flash-farm, so if you misjudge the enemy intentions, you might find yourself in a position, where your options are extremely limited and your economy is broken.

The vast majority of players in pubs try to turn Night Stalker into an actual DPS core by the late game. The level 20 and 25 talents are predominantly concentrated on getting extra damage and AS, turning Night Stalker into a pretty strong carry in his own right. He can’t necessarily compete with other hard carries, but the speed at which he can kill supports and utility cores increases drastically.

The item choices are also heavily dependant on whether you need even more damage after getting the talent bonuses, or if you need more utility. Both routes generally involve getting a BKB, but then it diversifies into either things like Basher and Nullifier for DPS route, or Blink Dagger, Heaven’ Halberd and even Shiva’s Guard for the utility one. Spirit Vessel is also generally the Night Stalker’s responsibility in the games your team needs it and should be generally purchased pretty early.

There are a couple of distinct differences between Night Stalker and other offlaners, however, despite them having a generally similar playstyle.

Night Stalker is not an aura carrier. Going for items like Pipe of Insight or Crimson Guard will severely limit the hero’s snowball potential and DPS progression, especially considering the hero’s lack of flash-farming tools. It is possible to make an argument towards Vladmir’s Offering, but the latest trends show that the item is slowly getting deeper and deeper into support domain. Assault Cuirass, given the hero’s natural Attack Speed, is also a bit of a redundancy.

Night Stalker’s teamfight should also be fast and precise. He has no damage mitigation or disengagement tools like many popular offlaners do, so his sustain in prolonged teamfight is very limited. As a Night Stalker, you need to start a fight with a quick and clean kill or two—having unobstructed vision is a massive help in this regard.

Finally, the lack of hard disables means that Night Stalker should be generally paired with cores and supports who can provide the necessary control. Sooner or later the enemy will get to save items and the teamfights will get more complicated and Night Stalker can be at a great disadvantage, compared to other offlaners, if he can’t deal damage and stay on target. I was trying to hit 4k for 6 years now i swear. My life was sad, i lost girlfriend, job and i was 3k. I was 3975 mmr 10 times and always fell down because of dogs. I done calibration score 8w 2l and i got 4.3k mmr because of this hero (from 3.8k), ez calibration ez life, ty batman you are my favorite hero from now on, fuck Venge fuck Brew and fuck Ta. 👍 i handle this hero by banning, or he would handle the game, lmao Nah, just rupture him and he lost his precious 12 Seconds, why not try support Blood anyway? it gives bloodrage to the one who keep last hitting, it has pure damage to block the chase and stop the cast if the opponent choose to ignore Yeah almost all of my games include Night Stalker in it (whether an ally or an enemy). Whenever an enemy picks it I insta-lock Bloodseeker and just cast rupture and ignore the guy for most of the fights.

All this this articles discussing about certain hero/es but no direct links to the hero's main page looks dumb.

^ bro "Void still deals half damage during the day" when you hover over it. <wink>