Anything Can Work: Offlane/Support Huskar 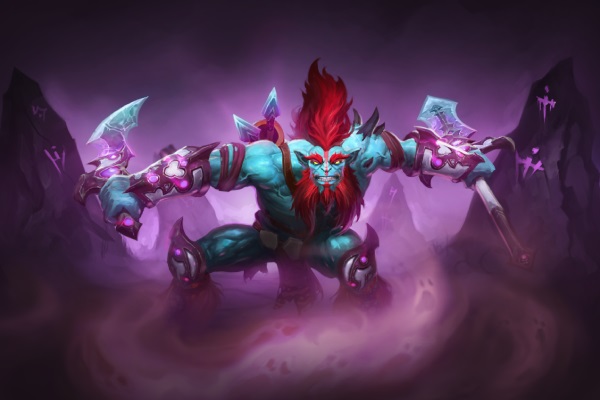 Knowing my propensity for theorycrafting, my fellow Dotabuff staffers challenged me to try and come up with a viable Huskar build in the current meta. The catch: play him in the offlane or support role.

The challenge arose out of a writers' meeting one day where we were discussing the new Aghanim’s Shards and Scepters. Both of Huskar’s upgrades appear to push the hero out of the early game cheesy carry role that he has occupied for much of Dota’s history. The Aghanim’s Scepter essentially turns Huskar into Axe, allowing the Sacred Warrior to leap on a target and taunt them for three seconds. The Aghanim’s Shard massively buffs Inner Fire, lowering cooldown, adding a 40% movement slow, and applying a healing reduction of 50%.

On paper, both of these purchases appear to open up some cool new options for the hero that should be very powerful. Immediately I wanted to pair the Aghanim’s Scepter with Blademail, which also gives Huskar some much-needed armor and even a bit of farming ability with the return damage. The Shard seems like a great situational counter to heroes that rely on sustain to fight and comes at a much cheaper price than a Spirit Vessel, Eye of Skadi, or Shiva’s Guard. All signs seemed to point to building Huskar as some sort of anti-carry front liner who can start fights or counter initiate to break them up. With this idea in mind, I queued up for a few games to test the theory. Here is what I learned:

Why utility Huskar could work:

This last point is where things start to break down in our quest to make Huskar a supportive hero. Back when Huskar was a more common last pick in the mid lane, his primary function was to counter harass heavy mid laners with magic resistance and high regeneration. To balance this, Icefrog made Huskar weak to physical damage with very low base armor. Huskar also does a lot of damage with Burning Spears and to balance this, he was given low base damage. When you combine low base armor and low base damage, you generally end up with a pretty bad hero.

Unfortunately, for Huskar it doesn’t end there. Huskar also has below-average movement speed and one of the shorter attack ranges for a ranged hero. In a one-on-one scenario in the mid lane this can’t be punished as much, but against two heroes in a side lane means you almost always put yourself at risk to harass. Finally, Huskar gets attack speed from his passive Berserker’s Blood and the common way to balance this for Icefrog is to give a hero poor agility gain. This means that the hero has some of the lowest armor in the game, even with levels.

Okay, so plenty of heroes have mediocre early games, but what about when Huskar gets some items? Again we start to run into some problems immediately. With Inner Fire, Huskar does have some AoE damage, but it’s not enough to kill a full creep wave instantly or farm up a jungle stack. Without wave clear, items are much harder to acquire and relying on Blademail to accelerate your farm just isn’t fast enough. It works for Spectre when paired with the hero’s elusivity and Dispersion but barely speeds up Huskar’s farm at all. Meteor Hammer is always another option to speed up farming. It certainly helps Huskar out in farming but only in this regard. For Treant Protector, Nyx Assassin, or Outworld Destroyer, the item gives important regen and combos with their ability to threaten kills.

We have now established that laning is hard and farming is hard but is there a point at which Huskar becomes strong in the game? These failings would be forgivable if Huskar hit a point like Timbersaw where you could plant him in a lane, walk at towers and never die. Unfortunately, in patch 7.20, Icefrog removed Huskar’s magic resistance from Berserker's Blood. This means that not only is the hero weak to physical damage but also can be bursted down by magic. Even if we were to somehow acquire gold, we would end up needing to buy both armor and magic resistance to be tanky enough to survive a fight, all the while damaging ourselves with Life Break and Burning Spears.

The biggest contrast I can give is comparing Huskar to Outworld Destroyer who suddenly became an offlaner and support due to having insane base armor, move speed, and harass potential with Arcane Orb. On OD, Meteor Hammer also gives him farming potential, stats, regen, and a combo that can solo kill a lot of heroes early and mid-game. OD doesn’t seem to need much more than a Meteor Hammer and boots to function, whereas Huskar needs five different items to do much of anything.

If Icefrog were to buff Huskar in some of the areas I have highlighted, I think there is some potential for the hero outside of mid. I did manage to go 2-2 in my four games played, though I’ll admit that neither of my wins felt remotely impacted by my hero. The only thing I impacted from my Huskar research is likely my behavior score, as not one of my teammates appeared happy to indulge my experimentation.

Dota has always been a game that rewards creativity. From Dendi’s Fountain Hooks of TI3 to OG’s TI9 winning carry Io, it is often the weirdest strategies that end up being the best. It’s important that we continue to foster this creativity in the game because it is one of the primary forces behind Dota’s longevity. It’s also important to be realistic with that creativity because sometimes an idea is not viable at the moment. It may be a bit much to say that absolutely everything can work in Dota, but if we don’t try, then we will never know what is really possible. Bro your previous games with huskar are a shitshow

But in all seriousness yeah its not good, would love to see some small changes to allow him in another role. Pick Oracle with him and get armlet. Cast False Promise when he's about to die. Tried and trusted and actually more busted now with shard and aghs You've summed up this article nicely i see These articles actually have people commenting on them? Interesting stuff. Duality, whatever you are smoking, I want some! These are your stats for the past 4 games of huskar. The authors of all these articles are borderline illiterate and dogstains at dota. Just why is this random divine 2 an author here and trying some 1k builds? I actually just don't see the point in this... Is this supposed to be new? Old huskar had heal.

Surprised that you actually managed to win while trying it out in ranked match. You should try SEA server haha. oh god, why are you bringing this terrible feature back?

i wouldn't mind it if it was some underrated builds, like clockwerk 3 or silencer 1 or something, something that could work, but you might as well make oracle pos 1 or medusa 5 guides at this rate. We don't do this. Donny, I've been a big fan of yours going back to the Pvgna days, and I enjoyed the article. You've been getting some assholes flaming you, I guess because they only care about what's OP, and they're miserable people lmao, but the article was good nonetheless. I just want to say that I love your take on the game, and it's a shame that Dota Alchemy couldn't keep going the way it did. I really miss listening to Alchemy Answers during my commute :( . Anyway, keep up the great work!

P.S. This probably is the direction that Valve wants to take the hero in, so talking about its strengths and weaknesses is only guilty of being ahead of its time.