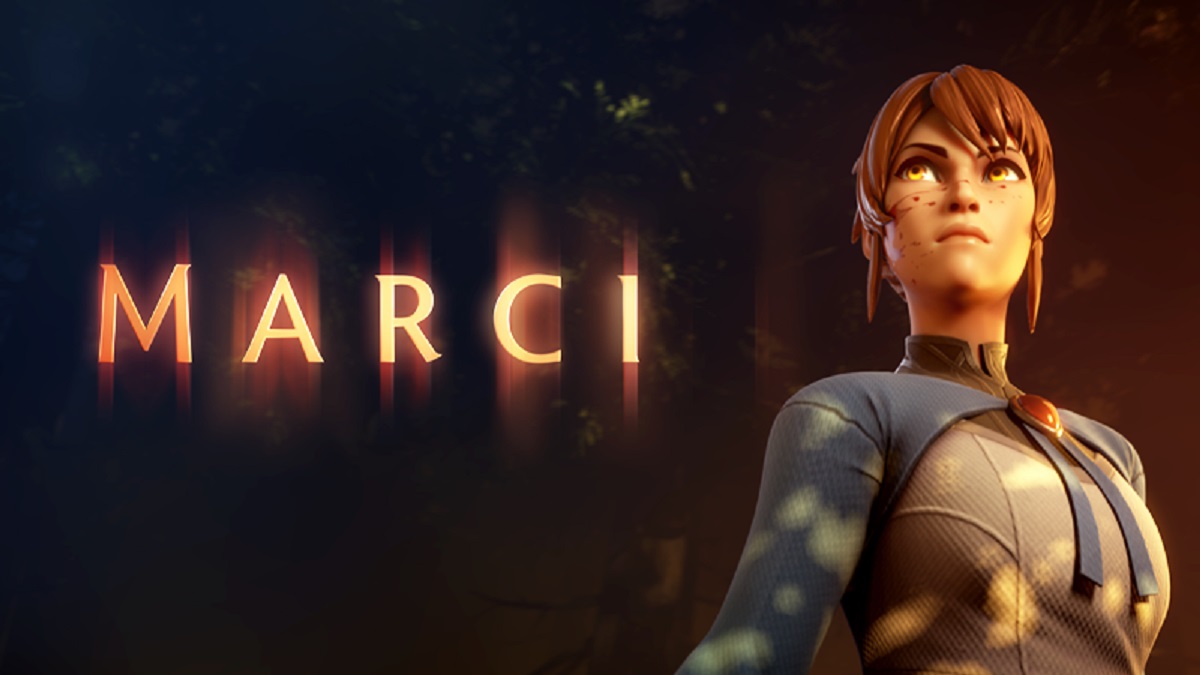 Okay, let’s just get this out of the way immediately. Marci is overpowered, like, old Earth Spirit or release-day-Monkey King overpowered. Because of this we will try to talk about what she does in a broader sense that should still be relevant after her numbers are nerfed to more acceptable levels.

With that in mind, let’s quickly go over what Marci brings to the table as a hero. She is a Strength hero with above average stat gain and a whole host of area of effect slows, stuns and repositioning abilities. My first impression was that she seemed to be some combination of Tusk, Monkey King and Earth Spirit. After playing a couple of games with Marci, this initial impression actually proved relatively close to the truth.

Marci’s kit of abilities centers around chasing and catching heroes before laying a real beatdown on them, either solo or with her team. Her Q-ability, Dispose functions almost exactly like Horn Toss, a skill that Team Spirit’s Collapse showed the power of at The International 10. It is a strong repositioning tool that can catch and toss an enemy back to slower allies to follow up on or create stunning chaos in a tightly packed fight. The unique part about Dispose is that it can also target allied units. This means that Marci can pull allies out of harm’s way or even toss them up cliffs or highgrounds as a short range saving mechanic. Because Dispose only moves units from directly in front of Marci to directly behind her it takes a bit of foresight and proper positioning to get value from. I was able to toss heroes out of an allied Puck’s Dream Coil to snap it which felt great. I also threw them out of my teammate’s attack range or follow up several times as well. Whoops.

Rebound is Marci’s W-ability and it is definitely going to take some time to get used to. The ability is two-phased and requires both regular mouse targeting and vector targeting to use. This ability is what will eventually separate a skilled Marci player from a casual one. The potential for zipping around fights, chasing down fleeing supports or simply initiating by diving the back lines is immense. The initial cast range of Rebound is a little bit shorter than a Blink Dagger but when combined with the vector targeted leap can surpass 1200 units. This obviously pairs extremely well with Dispose for initiating on a target. The mechanic is a bit more difficult to use due to needing another unit to target to make the jump. However, this can lead to some incredible and hilarious chasing scenarios where another mobile Hero like Puck or Earth Spirit jumps first and Marci uses them to leap even further. It’s also worth noting that Rebound’s movement cannot currently be interrupted by stuns.

Marci’s E-ability Sidekick is very similar to Tusk’s Tag Team. After jumping on a target Marci can buff her and one ally’s damage to finish off a kill quickly. Sidekick also gives Marci some interesting potential as a more defensive support hero by giving lifesteal to the paired unit. Sidekick is amazing for trading in lane and could also potentially be used to buff a carry as they jump into the fight. The 12 second cooldown and six second duration even makes me think there could be some potential to have Marci follow around a carry to help them farm stacks safely. At level 20 Sidekick becomes one of the best abilities in the game as it grants spell immunity for 1.75 seconds. Level 20 may be a bit difficult for a support to reach so we may also see Marci play a very similar role to the Press The Attack offlane Legion Commander build.

Marci’s ultimate, Unleash, is one of the first abilities likely to get nerfed. With an 18 second duration, Marci can get off up to 10 barrages of five attacks. Just that alone is like using a point blank Swashbuckle every 1.5 seconds for single target damage. On top of that Marci ends each flurry with what is essentially an Epicenter pulse that slows enemy movement and attack speed. Finally, upon activation Marci gets 15% bonus move speed and receives a basic dispel which removes things like roots and damage over time spells. When paired with the lifesteal from Sidekick, Unleash becomes possibly the best one-on-one spell in the game that also massively affects the area around her. With just a single damage item, Marci can melt enemy heroes with Unleash and get almost Satanic levels of healing when paired with Sidekick. This ability will no doubt have carry and mid players trying out Marci as well.

It’s always a bit tough to figure out what role a hero belongs in when their abilities are over tuned to this degree. Realistically, Marci can probably be played in every role at the moment but after some nerfs may settle into some sort of playmaking position 4, offlane or mid hero. The vast majority of her impact seems to fall in line with the likes of Tusk, Monkey King, Earth Spirit or Sand King. She is an incredibly well designed hero that has a huge amount of casual and competitive potential to speculate on and will be a great addition to Dota even after she gets nerfed into the ground.

The problem is that she cant be banned which is very irritating and makes games a lot more luck based. Other than that, this is the best patch hands down. Still looking for an addition of a hard carry, who was the last one though? Rebound can be interrupted. I played her against invoker and drow. Invokers deathening blast and drow gust both stop it mid air The toss seems the most broken to me. With the 1-2 punch you get from the reposition into [support chain stun] or the other way around.....it's horn toss at level 1. All other examples of enemy repositioning in the game are saddled with level 6, 20 min, situational effectiveness, or skillshot. It's because putting yourself in between the enemy and safety on your terms makes for a VERY reliable kill. It doesn't continue to be an overwhelmingly awesome skill I don't think, but during the laning phase it really can put you in control to hit some aggressive timings, making the ultimate feel even more overpowered.

If they mess just a little with the toss distance, remove the bkb talent, and reduce the distance you can jump, it might fall into a carry position. If you mess with the lifesteal and ultimate, probably will lean towards the offlane. Yes she is broken, but there’s no way she’s as broken as mk or earth spirit on launc

Marci is strong, but definitely not as OP as Monkey King. Few mana cost tweaking, cooldown increases and damage reduction should be fine. Her ultimate needs a mechanical change though. IMO, they could try punish if she didn't finish her Ultimate (duration cut, damage reduction on next attack, silence or else) which causes many heroes may have a good opportunity to disable completely. Dispose seems too OP for a level 1 reposition, might need a manacost and/or throw distance nerf. Rebound is a bit complicated for nerfing, but i guess a few tweak on mana scaling should be fine. Her sidekick really puts it all, a literal 6 second satanic + appliable to ally + 1.5s BKB seems put other supports into the trashcan.

For aghanim Shard, i propose (if in matter fact nerfed), several buff towards Unleash (removing her limitation as mentioned above) / grants status resistance / apllies strong dispel
For Aghanim's Scepter i think granting Rebound some sort of mechanical advantage will be very cool. Either no longer needs a target (similiar to HoN's Monkey King where he could summon a rock) or let her bounce towards another ally before landing, which naturally increases cast range and buffing more allies.

Marci is powerful for sure. There is some tinkering with the numbers to be done. The stun needs to be lowered, that is just too powerful especially in the early game. You displace an opposing hero and stun him in the process. Then you get free hits on the stunned target that is almost certainly now out of position... There aren't many heroes that can walk out of that. But I don't see any large changes that are required. It is just that most of the new heroes now-a-days seem to be coming out with higher and higher mobility. And Marci is definitely following this trend. She may need to lose some movement speed too, 310 is quite a lot when chasing 280-290 speed support heroes. They basically have no chance, especially with the additional mobility on the hero. Almost any hero can feel powerful with a networth advantage. One thing everyone in the commends is currently ignoring is her stat gain. @Metsis mentioned her movespeed; 310 is super high and lets her chase down supports. Her stat gain though is super good, it's given a mention at the start but her stat gain combined with her relatively low mana costs means that she can do her tricks over and over again. Maybe she needs a clarity in the very early game but that's it. Not only is her kit super good but she can just use it over and over, AND she has the movespeed to get to use it in the first place.
All heroes want Durability, Damage, Disable, Mana and Mobility.
Marci has all 5 of those.
Her large strength gain and being a strength hero means she has durability, and gets some damage from it. Her ult is obviously a heap of damage. She has lots of disable, obviously with Dispose. She doesn't have Mana issues like say, Underlord and 1.9 int gain is pretty fine. Then her mobility is off the charts. High base movespeed, and Rebound is loads of mobility.
I've seen games where a Marci just rushes phase and BKB because she doesn't need anything else; bkb lets her ignore disables early and go ham, plus it has damage for her because of its strength and raw damage. Her cooldowns are also fairly low for how crazy her abilities are
In short, Valve needs to nerf her stats, nerf her mana, either by increasing her mana costs or reducing her base int and int gain (or both).

Look at force staff, 23 cd. But Dispose has 16 at the worst and 10s at the best; similar to Magnus Skewer + horn toss except even better AND with a fixed mana cost of 90; Horn Toss has a cost of 110 at max and a cd of 10 at max too but horn toss has a THIRTY second CD; it can be used in a fight only once.
Rebound too has a short cooldown, allowing her to use it to initiate, and then escape at the end of a fight or use it as a chaser for both herself and an ally. Marci players don't even need to decide to use rebound to start a fight, or if they should save it for chase or something. Every single part of her kit is too good.
Sidekick and Unleash have already been covered. ursa with 16 sec of furry swipes,low man lifesteal and bonus attack,mini swap with stun,blink+damage(still buggy).she doesn't need too much items. People keep saying that Marci is broken, meanwhile none of them have figured out how to play against her. Marci is incredibly weak laner and has no flash farm and if punished in the lane, you'd be surprised how useless she can be.

they need to give her bra,her boobs are literally hanging.

Dotabuff Plus has a new feature: Hero Mastery! See how your performance on each hero stacks up against the competition. Subscribe to Dotabuff Plus now at a limited-time holiday price!